Picture this… It’s finally Saturday night date night and you’ve been anxiously waiting for this night for weeks. A hot new spot in the city has just recently opened up and the critics are raving. You’re hearing that the food is on point and the ambience has been said to be truly unique. Curious and bored of the usual places, you and your wife decide to venture out to check out what all the buzz is about. You walk in and right in front, the first thing you see is a large communal table filled with couples, kids, and chaos. How do you react?

Or maybe this is more of your reality: You’re new to the area. You’ve recently landed in a city you’ve only spent a handful of days in. After a bit of social media research digging through images, likes, and reviews you find out about a new place that’s getting a lot of attention. Craving interaction outside of your cramped apartment, you decide to head out and see what’s happening at this new spot. You walk in and immediately you are met with the site of a communal table brimming with laughter, smiling faces, and even a warm glance sent your way. How do you react? 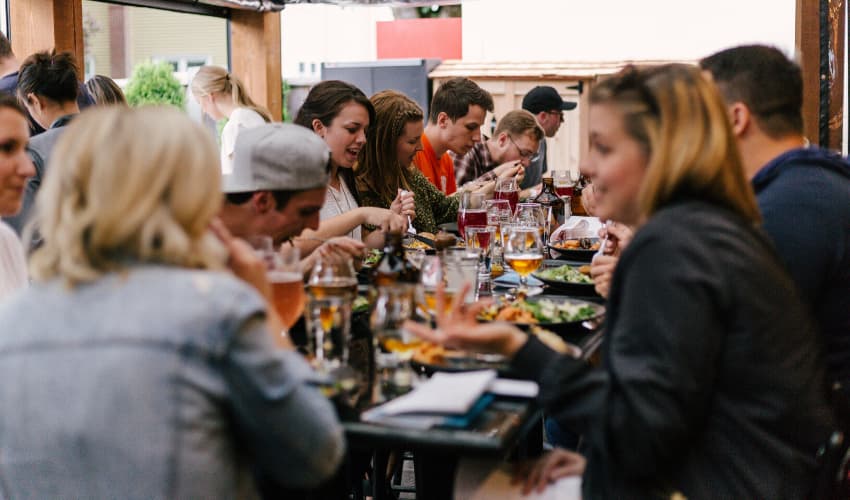 The Roots of Dinning

Communal tables are quickly becoming a trend in many foodie cities around the world. Although they may seem like the hottest thing to hit the hospitality scene since buttered bread, this set up has actually been around way before we even knew what a deconstructed, sous vide, or flambé anything was.

Dating as far back as Biblical times and well into the 19th century, communal seating was the norm. Restaurants did not hold the same entertainment value they do today. Eating was a necessity and the atmosphere lent itself for that, and only that. Tired travellers, simple meals, and no menus. Patrons were to be fed and then promptly cleared away to make room for the next hungry soul. No special of the day, no table-side presentations. While the commoners ate in elevated troughs, only the wealthy enjoyed the privacy of individual tables. So how did we get from there to the dimly lit, private table in the back world we live in now?

As the classes began to blend and the gap between the ultra-rich and the dirt poor narrowed, dining turned into more of an experience rather than a necessity. From fast food to lavish, pre-fixe menus, the actual act of eating outside of the home is now a form of entertainment. As a pastime blended with a human necessity, preferences are blended as well. Some diners prefer to grab and go, eat on the run, and have little need or desire to interact with their neighbours. Others relish in the idea of long conversations, meeting fellow diners, and enjoying the environment beyond the plate. Here is where communal tables have lit the flame of controversy. Fun and friendly or invasive and irritating?

Which Side of the Communal Table are You On?

As hotly debated as whether or not table napkins should be black or white, communal tables have created an ongoing buzz amongst the masses. It has been said that the only way to get strangers to sit around a table together is by involving plenty of alcohol, offering interesting food to entertain and distract them from the unfamiliar, or to make it socially acceptable to ignore anyone seated at the table they don’t already know. The good, the bad, and the business side of the discussion are all viable arguments, each with its own points of interest. Yet seldom are all three considered.

In a world where most individuals tend to be singular and solo-driven, this one piece of furniture has the ability to change this solitary lifestyle even if for just one meal. Communal tables are built on a wholesome, inclusive idea that can alter our continued pattern of keeping our heads down and charging forward. Let’s consider who can actually benefit from this shared dining atmosphere.

Foodie cities are usually ones in which many people flock to. Whether to vacation, live, or work in, these cities have a constant influx of newcomers looking to build memories as well as a life there. Being in a new environment can be lonely, intimidating, and downright daunting. Communal tables are made to dispel these very feelings. A warm welcome and friendly conversation may be just what can turn an ordinary night into a great one for someone looking for acceptance in a new place.

Have you ever attempted to start a conversation with someone in a social setting and simply had nothing to say, flopped, and had to walk away defeated? It has happened to the best of us. A communal table can be a great setting to establish a connection with a handsome stranger. In a setting that lends itself to friendly banter and rubbing elbows, breaking the ice can be ideal in this type of situation. Meeting new people, establishing friendships, and even making a love connection is more than possible. A built-in sense of community can take any ordinary dining experience and make it into one where relationships are built.

Probably the biggest and most important benefit of the communal concept is that it forces us to do the one thing we have trouble doing in our digital day and age – put down the phone. Emails, texts, social media notification, and alerts are never-ending. A communal table allows us to take a moment away from the screen and get back into reality. We are able to have face to face interactions once again without waiting for a reply that can feel like it will never arrive. It helps us see each other as humans and not as computer-animated figments.

Even though communal tables are added to a restaurant with the best of intentions on both the emotional and business side, there are a few drawbacks. In an industry as demanding and fickle as hospitality, there will never be a time when each and every patron is at a consistent level of happy. There will always be someone disgruntled, displeased, and even disappointed. Communal tables are no exception to this potential for a poor attitude.

The very reason this particular piece of restaurant furniture is so popular is the same reason for its downfall – the forced shared space it creates. While some see their opportunity to share a meal with a stranger as a positive, there are others that don’t.

While we live in a society with its head permanently buried in a phone and where social interaction is now done mainly behind a screen and a keyboard, the idea of dining next to a stranger is not always met with open arms. Many people prefer to sit alone, stay within their comfortable space inside themselves, and limit any foreign interaction. The term “personal space” has now taken on a deeper meaning.

One of the main arguments against communal table setups is the lack of privacy. Many people take dinner as a chance to discuss personal, sensitive, and even secretive topics. With neighbours literally within an earshot, it can be awkward and uncomfortable to have these kinds of conversations. Throw in a couple of screaming children and the dinner table has now become a place for “sensitive ears” at all age levels.

A very valid and very disgusting opponent to the communal table is the idea of germs. You may consider yourself a cleanly, neat person, but that does not mean the person next to you is. Sneezing, coughing, burping, and sweating are all bodily functions that happen naturally and at any given time. If you’re seated within very close proximity of someone while any one of these occurs, it can make your night out take a nosedive very quickly.

Good, bad, or indifferent, this new take on seating arrangements has caught the eye of the business side of the equation. Although a nice dinner serves as entertainment for the guest, ultimately, it is a business transaction with the goal of revenue. Meaning, the more money the better. When considering how to go about achieving this goal, there are two ways of doing so: raise prices or add more seats. Communal tables allow for the latter to be implemented without upsetting guests where it actually upsets them – their pocketbook.

Space is money. Restaurants want more of one but have little of the other. In between tables and chairs is the potential for more profit. By eliminating any unused space, the restaurant can create more room for paying customers and the best use of every inch to convert it to cash. Larger parties can better be accommodated while more guests can be seated with less wait time. With a packed house, restaurants can appear more popular, busy, and appealing which then creates an allure for potential customers that may want to come in and check it out for themselves. A similar concept to holding a line outside of a nightclub.

Whether you’re on board with the fun or prefer your privacy, seating arrangements are largely out of our hands if you want to spend any amount of time at a restaurant. If you want to eat the food, you need to follow the rules. Luckily, there are a few unspoken rules that can make the experience more enjoyable for everyone no matter what type of table set up you’re facing.

As many diners would agree, when faced with a communal table situation, it is best to follow the “aeroplane rule.” That is, smile and nod but don’t assume your neighbour wants to talk. If you’re a chatter and wish to rally a conversation, test the waters with a small comment and see if anyone bites. If all you get back are short, one-word answers, it is safe to say your fellow diners are not interested in conversing and it is the polite thing to keep to yourself. Conversely, you may be the ice breaker the table was waiting for to get the conversation going. So it could actually work in your favour. Either way, tread lightly and listen to social cues as you respect other’s space.

A more commonsense marker of communal table etiquette involves the small amount of personal space you have as a diner. Elbow room, plate and cup placement, and even the decibel of your voice are all things that need to be considered when you’re in a shared space. Don’t be the guy with legs spread wide and a screeching laugh when in close quarters to others. Keep your dining tools close to you and your extremities even closer. The key is to respect other’s comfort. Your overly expressive arm gestures are not part of that.